When, Finland, this country comes to our minds, it is quite easy for us to associate with the prestigious cell-phone company “NOKIA”, and its unbeatable high technology communication industry. However, following the change of entire cell-phone industry, the rise of smart phone not only has an influence upon people’s communication and interaction, but also makes Finland, once monopolized the whole cell-phone industry, feel the threat and challenge coming from other new competitors in the smart phone industry. However, even though Finland’s cell-phone industry has encountered frustrations in recent years in global markets, the Finland government still poured many funds into the area of technology and innovation, and brought up the birth of “Angry Birds”, one of the most popular smart phone games in the world. The Finland government still keeps the tradition to encourage R&D, and wishes Finland’s industries could re-gain new energy and power on technology innovation, and indirectly reach another new competitive level. 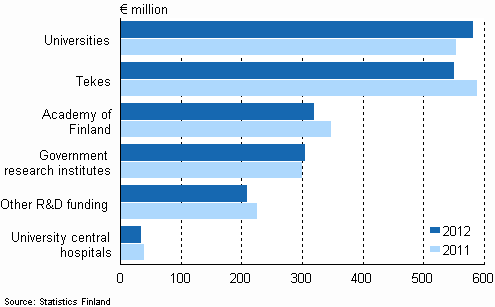 As a result of the fact that Finland promotes industries’ innovative activities, it not only made Finland win the first position in “Growth Competitiveness Index” published by the World Economic Forum (WEF) during 2000-2006, but also located the fourth position in 142 national economy in “The Global Competitiveness Report” published by WEF, preceded only by Swiss, Singapore and Sweden, even though facing unstable global economic situations and the European debt crisis. Hence, observing the reasons why Finland’s industries have so strong innovative power, it seems to be related to the Finland’s national technology administrative system, and is worthy to be researched.

Finland technology administrative system can be divided into four parts, and the main agency in each part, based upon its authority, coordinates and cooperates with making, subsidizing, executing of Finland’s technology policies. The first part is the policy-making, and it is composed of the Congress, the Cabinet and the Research and Innovation Council; the second part is policy management and supervision, and it is leaded by the Ministry of Education and Culture, the Ministry of Employment and the Economy, and other Ministries; the third part is science program management and subsidy, and it is composed of the Academy of Finland (AOF), the National Technology Agency (Tekes), and the Finnish National Fund Research and Development (SITRA); the fourth part is policy-executing, and it is composed of universities, polytechnics, public-owned research institutions, private enterprises, and private research institutions. Concerning the framework of Finland’s technology administrative, it can be referred to below. 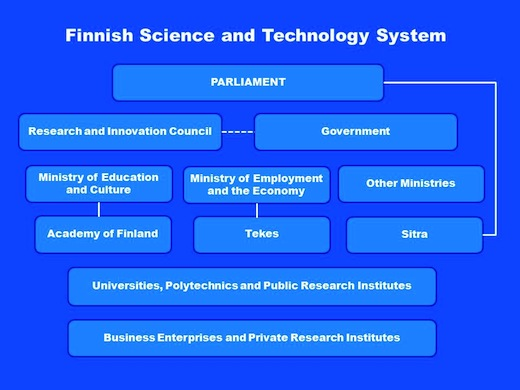 B. The Agency of Finland’s Technology Policy Making and Management

The Research and Innovation Council is an integration unit for Finland’s national technology policies, and it originally is a consulting agency between the cabinet and Ministries. However, in the actual operation, its scope of authority has already covered coordination function, and turns to direct to make all kinds of policies related to national science technology development. In addition, the consulting suggestions related to national scientific development policies made by the Research and Innovation Council for the cabinet and the heads of Ministries, the conclusion has to be made as a “Key Policy Report” in every three year. The Report has included “Science, Technology, Innovation” in 2006, “Review 2008” in 2008, and the newest “Research and Innovation Policy Guidelines for 2011-2015” in 2010.

As for the Ministry of Employment and Economy, its major duties not only include labor, energy, regional development, marketing and consumer policy, but also takes responsibilities for Finland’s industry and technical policies, and provides industries and enterprises with a well development environment upon technology R&D. The business scope of the Ministry of Employment and Economy puts more focus on actual application of R&D results, it covers applied research of scientific technology, technology development, commercialization, and so on. The direction of Finland’s national technology policy is to strengthen the ability and creativity of industries’ technology development, and its objects are, first, to develop the new horizons of knowledge with national innovation system, and to provide knowledge-oriented products and services; second, to promote the efficiency of the government R&D funds; third, to provide cross-country R&D research networks, and support the priorities of technology policy by strengthening bilateral or multilateral cooperation; fourth, to raise and to broaden the efficiency of research discovery; fifth, to promote the regional development by technology; sixth, to evaluate the performance of technology policy; seventh, to increase the influence of R&D on technological change, innovation and society; eighth, to make sure that technology fundamental structure, national quality policy and technology safety system will be up to international standards.

(C) The Agency of Finland’s Technology Policy Management and Subsidy

Back
Previous Impact of Government Organizational Reform to Scientific Research Legal System and Response Thereto (1) – For Example, The Finnish Innovation Fund (“SITRA”) Next Executive Yuan’s call to action:“Industrial Upgrading and Transformation Action Plan”
You may be interested
Introduction to Tax Incentive Regime for SMEs

I. Introduction The human genes database or human genome project, the product under the policy of biotechnology no matter in a developed or developing country, has been paid more attention by a government and an ordinary people gradually. The construction of human genes database or human genome project, which is not only related to a country’s innovation on biotechnology, but also concerns the promotion of a country’s medical quality, the construction of medical care system, and the advantages brought by the usage of bio-information stored in human genes database or from human genome project. However, even though every country has a high interest in setting up human genes database or performing human genome project, the issues concerning the purposes of related biotechnology policies, the distribution of advantages and risks and the management of bio-information, since each country has different recognition upon human genes database or human genome project and has varied standards of protecting human basic rights, there would be a totally difference upon planning biotechnology policies or forming the related systems. Right now, the countries that vigorously discuss human genes database or practice human genome project include England, Iceland, Norway, Sweden, Latvia and Estonia. Estonia, which is the country around the Baltic Sea, has planned to set up its own human genes database in order to draw attention from other advanced countries, to attract intelligent international researchers or research groups, and to be in the lead in the area of biotechnology. To sum up, the purpose of constructing Estonian human genes database was to collect the genes and health information of nearly 70% Estonia’s population and to encourage bio-research and promote medical quality. II. The Origin of Estonian Human Genes Database The construction of Estonian human genes database started from Estonian Genome Project (EGP). This project was advocated by the professor of biotechnology Andres Metspalu at Tartu University in Estonia, and he proposed the idea of setting up Estonian human genes database in 1999. The purposes of EGP not only tried to make the economy of Estonia shift from low-cost manufacturing and heavy industry to an advanced technological economy, but also attempted to draw other countries’ attention and to increase the opportunity of making international bio-researches, and then promoted the development of biotechnology and assisted in building the system of medical care in Estonia. EGP started from the agreement made between Estonian government and Eesti Geenikeskus (Estonian Genome Foundation) in March, 1999. Estonian Genome Foundation was a non-profit organization formed by Estonian scientists, doctors and politicians, and its original purposes were to support genes researches, assist in proceeding any project of biotechnology and to set up EGP. The original goals of constructing EGP were “(a) reaching a new level in health care, reduction of costs, and more effective health care, (b) improving knowledge of individuals, genotype-based risk assessment and preventive medicine, and helping the next generation, (c) increasing competitiveness of Estonia – developing infrastructure, investments into high-technology, well-paid jobs, and science intensive products and services, (d) [constructing] better management of health databases (phenotype/genotype database), (e) … [supporting]… economic development through improving gene technology that opens cooperation possibilities and creates synergy between different fields (e.g., gene technology, IT, agriculture, health care)”1. III. The Way of Constructing Estonian Human Genes Database In order to ensure that Estonian human genes database could be operated properly and reasonably in the perspectives of law, ethics and society in Estonia, the Estonian parliament followed the step of Iceland to enact “Human Genes Research Act” (HGRA) via a special legislative process to regulate its human genes database in 2000. HGRA not only authorizes the chief processor to manage Estonian human genes database, but also regulates the issues with regard to the procedure of donation, the maintenance and building of human genes database, the organization of making researches, the confidential identity of donator or patient, the discrimination of genes, and so on. Since the construction of Estonian human genes database might bring the conflicts of different points of view upon the database in Estonia, in order to “avoid fragmentation of societal solidarity and ensure public acceptability and respectability”2 , HGRA adopted international standards regulating a genes research to be a norm of maintaining and building the database. Those standards include UNESCO Universal Declaration on the Human Genome and Human Rights (1997) and the Council of Europe’s Convention on Human Rights and Biomedicine (1997). The purpose of enacting HGRA is mainly to encourage and promote genes researches in Estonia via building Estonian human genes database. By means of utilizing the bio-information stored in the database, it can generate “more exact and efficient drug development, new diagnostic tests, improved individualized treatment and determination of risks of the development of a disease in the future”3 . In order to achieve the above objectives, HGRA primarily puts emphasis on several aspects. Those aspects include providing stronger protection on confidential identity of donators or patients, caring for their privacy, ensuring their autonomy to make donations, and avoiding any possibility that discrimination may happen because of the disclosure of donators’ or patients’ genes information. 1.HERBERT GOTTWEIS & ALAN PETERSEN, BIOBANKS – GOVERNANCE IN COMPARATIVE PERSPECTIVE 59 (2008). 2.Andres Rannamae, Populations and Genetics – Legal and Socio-Ethical Perspectives, in Estonian Genome Porject – Large Scale Health Status Description and DNA Collection 18, 21 (Bartha Maria Knoppers et al. eds., 2003. 3.REMIGIUS N. NWABUEZE, BIOTECHNOLOGY AND THE CHALLENGE OF PROPERTY – PROPERTY RIGHTS IN DEAD BODIES, BODY PARTS, AND GENETIC INFORMATION, 163 (2007).