The Demand of Intellectual Property Management for Taiwanese Enterprises

74.18% of Taiwanese enterprises believe that intellectual property can increase economic value and 58.61% of those believe that it can effectively prevent competitors from entering the market.

Graph 1 The benefit of intellectual property for the company

Nearly 80% of listed and OTC companies set up full time personnel for intellectual property and over 50% of those have established dedicated department to handle its business that is higher than 30% in 2012.

Graph 2 Specialized Department or personnel for intellectual property by year 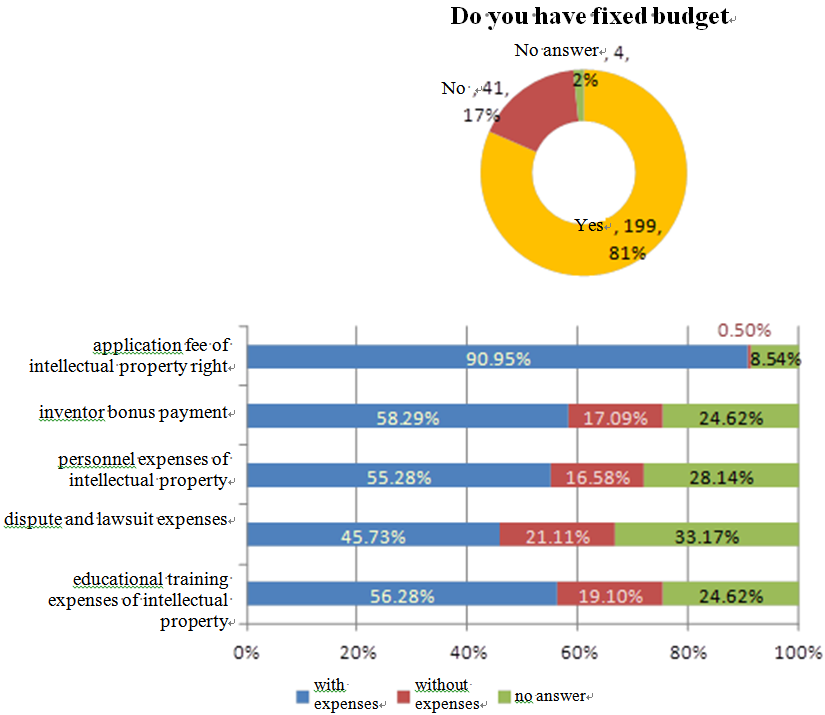 1.Interior intellectual property personnel is seldom to be involved in the core decision making in Taiwanese enterprises

Based on the importance and difficulty of intellectual property, most items in the area of high importance and difficulty are demand of professionals and practical experiences  (e.g.: lack of interior talent, do not understand international technology standard and specification, lack of platform to obtain experiences and cases). Only application time is for administrative procedure of Intellectual Property Offices. Therefore, it is known that intellectual property department of respondent companies lacks experienced talents. 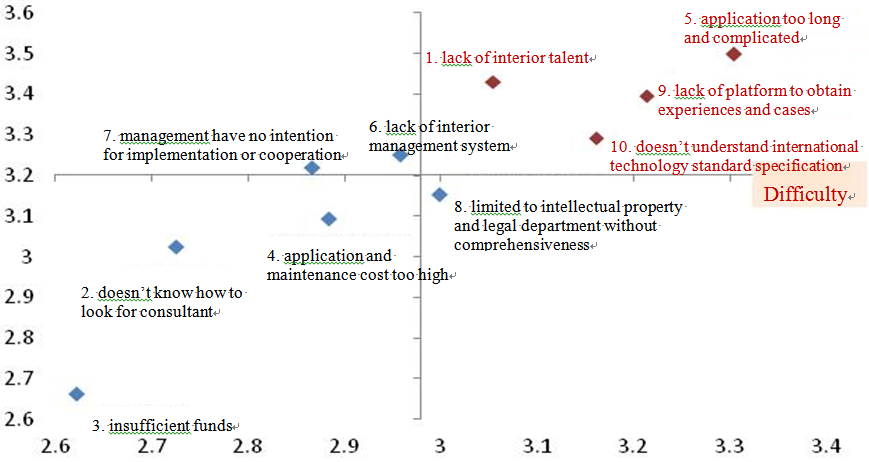 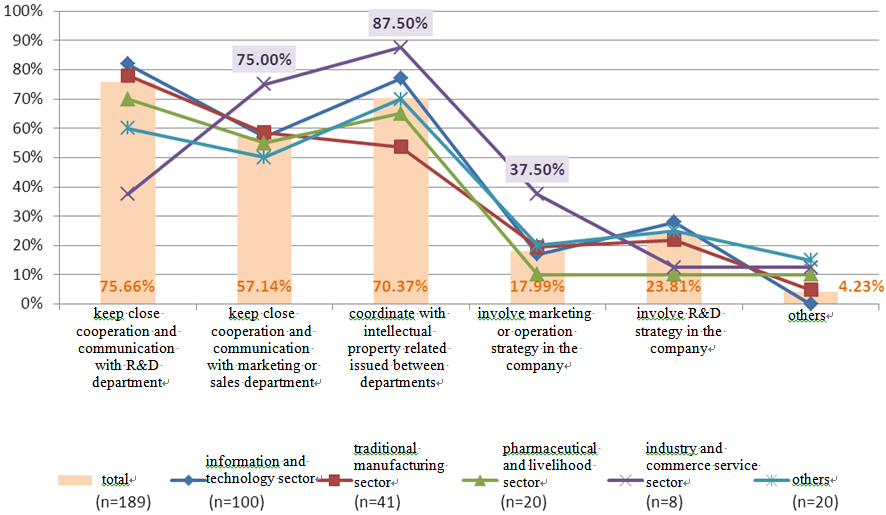 Graph 5 The job of intellectual property department or personnel

It is shown that 60% of firms are without and did not obtain technology transfer (among which the traditional manufacturing sector has the highest percentage). 22.95% of firms are without but obtained technology transfer and 4.51% of those are with but did not obtain technology transfer. In addition, most of the jobs of intellectual property are administration other than activation such as treatment of authorization contract and transaction and sending warning letter of infringement. Therefore, it is assumed that intellectual property is not the key for profitability in the business. 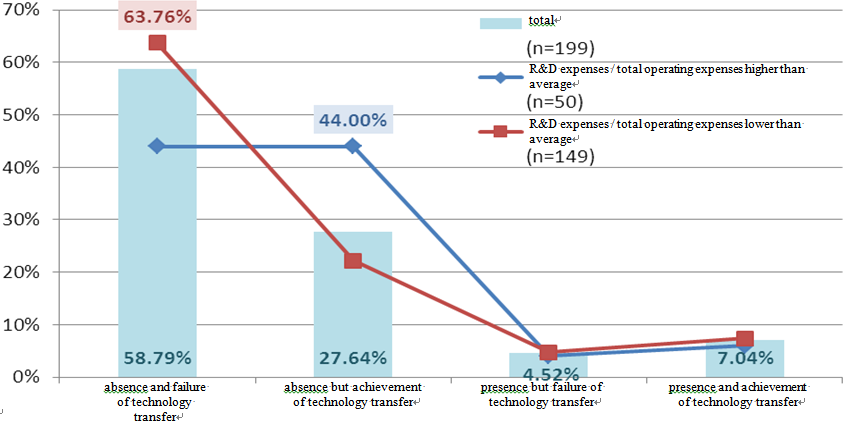 4.Most of Taiwanese enterprises R&D on their own so to lack of introduction experience of external R&D results

Among the survey, nearly 90% of firms R&D each item on their own except the copyright part with lower percentage of 78.5%. 15.89% of it is from outsourcing development and 13.08% of it is from authorization. In addition, the outsourcing development and authroization of  invention patent part have higher percentage which is 17.34% and 15.61% respectively. However, the speed of self R&D can’t meet the speed of product elimination nowadays. Therefore, under global open competition, corporate may try to cooperate with universities and research institutions to speed up R&D progress. 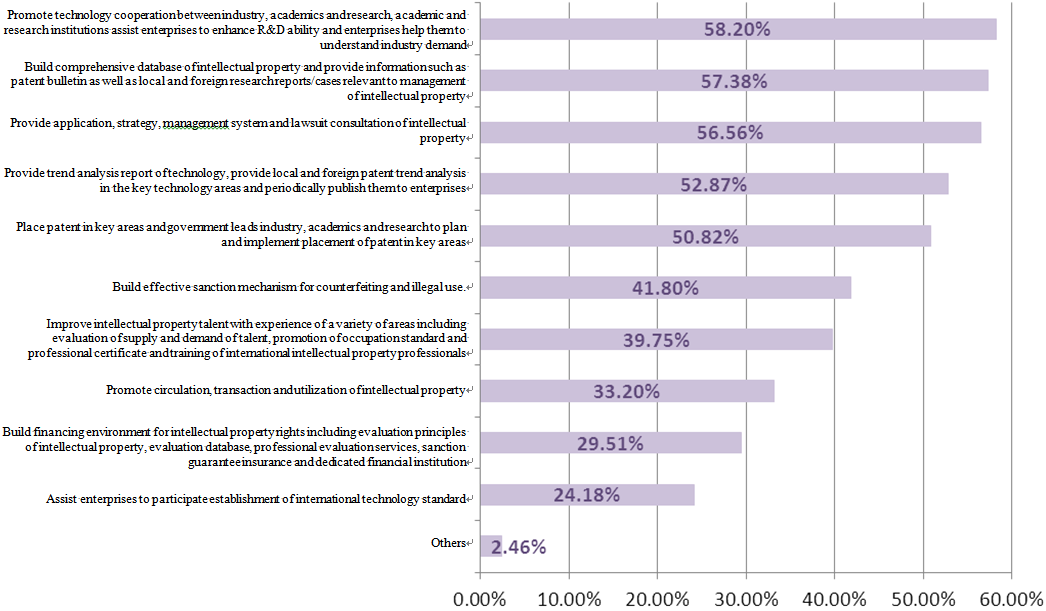 5.Taiwanese enterprises  focus only on patent and trademark but ignore trade secret and copyright

From the intellectual property items enterprises possessed each year, it is found that trademark has the highest percentage (over 80% for four-year average) and next items are invention patent and utility model  patent. The awareness that corporates have on intellectual property is only limited to patent and trademark. They overlook that their core ability may be protected by trade secret and copyright.

Among the 2015 survey, 85% of respondent firms developed to overseas. Under which the highest percentage is 79.81% for overseas sale then 56.25% for self-establishment of overseas factory for manufacturing. Furthermore, the percentage of outsourcing  in traditional manufacturing sector is the highest than that of other industries which 77.36% of traditional manufacturing firms established overseas factory for manufacturing. The percentage of overseas sale in pharmaceutical and livelihood sector is 91.3% and slightly higher than that in other industries. The result shows that different industry will select different overseas development strategy based on its sector characteristics and R&D difficulty.

As a whole, the highest risk that might be occurred from enterprises developed overseas is leakage of trade secrets. Next risks are 47.12% for being accused of product infringement and 42.31% for patent being registered. Further, the risk control greatly varies from different sector. The risks that industry and commerce service sector regards are quite different from other sectors. For example, its risk of dispute of employee jumping ship or being poached which accounted for 50% is higher than that of other sectors. In addition to the three common risks mentioned above, information and technology sector believes that there might be risk of patent dispute which accounted for 35.29% and is higher than that of other sectors.

2.The most dissatisfied part that Taiwanese enterprises have to the intellectual property outsourcing service is insufficient experiences on the treatment of international affairs

Enterprises may apply for patent, trademark, trade secret and copyright. For instance, brand management can be conducted with trademark and copyright and core technology or service can be protected by patent and trade secret instead of using trademark or patent alone as primary strategy.

In addition, the actual overseas intellectual property demand of enterprises can be found through this introduction of consultation services. To satisfy enterprises’ demand, service providers may need to improve their ability together.

Under the fast-evolved and competitive environment, enterprises shall not only depend on their own R&D. Moreover, they shall leverage the R&D result of academic and research institutions to improve so to make subsidy of those institutions from government have real impact on them. Therefore, there is demand of cooperation between industry, academics and research. The cooperation access between them should be built to achieve synergy of R&D.