3.Commission of Technology and Innovation (CTI)

The CTI is also an institution dedicated to boosting innovation in Switzerland.  Established in 1943, it was known as the Commission for the Promotion of Scientific Research[1].  It was initially established for the purpose of boosting economy and raising the employment rate, and renamed after 1996.  The CTI and SNSF are two major entities dedicated to funding scientific research in Switzerland, and the difference between both resides in that the CTI is dedicated to funding R&D of the application technology and industrial technology helpful to Switzerland’s economic development.

Upon enforcement of the amended RIPA 2011, the CTI was officially independent from the Federal Office for Professional Education and Technology (OEPT) and became an independent entity entitled to making decisions and subordinated to the Federal Department of Economic Affairs (FDEA) directly[2].  The CTI is subject to the council system, consisting of 65 professional members delegated from industrial, academic and research sectors.  The members assume the office as a part time job.  CTI members are entitled to making decisions on funding, utilization of resources and granting of CTI Start-up Label independently[3].

The CTI primarily carries out the mission including promotion of R&D of industrial technology, enhancement of the market-orientation innovation process and delivery of R&D energy into the market to boost industrial innovation.  For innovation, the CTI's core mission is categorized into[4]:

The CTI invests considerable funds and resources in boosting the R&D of application technology and industrial technology.  The CTI R&D Project is intended to fund private enterprises (particularly small-sized and medium-sized enterprises) to engage in R&D of innovation technology or product.  The enterprises may propose their innovative ideas freely, and the CTI will decide whether the funds should be granted after assessing whether the ideas are innovative and potentially marketable[5].

CTI’s funding is conditioned on the industrial and academic cooperation.  Therefore, the enterprises must work with at least one research institution (including a university, university of science and technology, or ETH) in the R&D.  Considering that small-sized and medium-sized enterprises usually do not own enough working funds, technology and human resources to commercialize creative ideas, the CTI R&D Project is intended to resolve the problem about insufficient R&D energy and funds of small- and medium-sized enterprises by delivering the research institutions’ plentiful research energy and granting the private enterprises which work with research institutions (including university, university of science and technology, or ETH) the fund.  Notably, CTI’s funding is applicable to R&D expenses only, e.g., research personnel’s salary and expenditure in equipment & materials, and allocated to the research institutions directly.  Meanwhile, in order to enhance private enterprises' launch into R&D projects and make them liable for the R&D success or failure, CTI’s funding will be no more than 50% of the total R&D budget and, therefore, the enterprises are entitled to a high degree of control right in the process of R&D.

The industrial types which the CTI R&D Project may apply to are not limited.  Any innovative ideas with commercial potential may be proposed.  For the time being, the key areas funded by CTI include the life science, engineering science, Nano technology and enabling sciences, etc.[6]  It intends to keep Switzerland in the lead in these areas.  As of 2011, in order to mitigate the impact of drastic CHF revaluation to the industries, the CTI launched its new R&D project, the CTI Voucher[7].  Given this, the CTI is not only an entity dedicated to funding but also plays an intermediary role in the industrial and academic sectors.  Enterprises may submit proposals before finding any academic research institution partner.  Upon preliminary examination of the proposals, the CTI will introduce competent academic research institutions to work with the enterprises in R&D, subject to the enterprises' R&D needs.  After the cooperative partner is confirmed, CTI will grant the fund amounting to no more than CHF3,500,000 per application[8], provided that the funding shall be no more than 50% of the R&D project expenditure.

The CTI R&D Project not only boosts innovation but also raises private enterprises’ willingness to participate in the academic and industrial cooperation, thereby narrowing the gap between the supply & demand of innovation R&D in the industrial and academic sectors.  Notably, the Project has achieved remarkable effect in driving private enterprises’ investment in technology R&D.  According to statistical data, in 2011, the CTI solicited additional investment of CHF1.3 from a private enterprise by investing each CHF1[9].   This is also one of the important reasons why the Swiss innovation system always acts vigorously.

Data source: Prepared by the Study

The CTI is dedicated to driving the economy by virtue of innovation as its priority mission.  In order to cultivate the domestic start-ups with high growth potential in Switzerland, the CTI Startup project was launched in 1996[10] in order to provide entrepreneurs with the relevant guidance services. The project selected young entrepreneurs who provided innovative ideas, and guided them in the process of business start to work their innovative ideas and incorporate competitive start-ups.

In order to enable the funding and resources to be utilized effectively, the CTI Startup project enrolled entrepreneurs under very strict procedure, which may be categorized into four stages[11]:

Meanwhile, the “CTI Invest” platform was established to help start-up raise funds at the very beginning to help commercialize R&D results and cross the valley in the process of R&D innovation.  The platform is a private non-business-making organization, a high-tech start-up fund raising platform co-established by CTI and Swiss investors[14].  It is engaged in increasing exposure of the start-ups and contact with investors by organizing activities, in order to help the start-ups acquire investment funds.

KTT Support (Knowledge & Technology Transfer (KTT Support) is identified as another policy instrument dedicated to boosting innovation by the CTI.  It is intended to facilitate the exchange of knowledge and technology between academic research institutions and private enterprises, in order to transfer and expand the innovation energy.

As of 2013, the CTI has launched a brand new KTT Support project targeting at small-sized and medium-sized enterprises.  The new KTT Support project consisted of three factors, including National Thematic Networks (NTNs), Innovation Mentors, and Physical and web-based platforms.  Upon the CTI’s strict evaluation and consideration, a total of 8 cooperative innovation subjects were identified in 2012, namely, carbon fiber composite materials, design idea innovation, surface innovation, food study, Swiss biotechnology, wood innovation, photonics and logistics network, etc.[15]  One NTN would be established per subject.  The CTI would fund these NTNs to support the establishment of liaison channels and cooperative relations between academic research institutions and industries and provide small- and medium-sized enterprises in Switzerland with more rapid and easy channel to access technologies to promote the exchange of knowledge and technology between both parties.  Innovation Mentors were professionals retained by the CTI, primarily responsible for evaluating the small-sized and medium-sized enterprises’ need and chance for innovation R&D and helping the enterprises solicit competent academic research partners to engage in the transfer of technology.  The third factor of KTT Support, Physical and web-based platforms, is intended to help academic research institutions and private enterprises establish physical liaison channels through organization of activities and installation of network communication platforms, to enable the information about knowledge and technology transfer to be more transparent and communicable widely.

In conclusion, the CTI has been dedicated to enhancing the link between scientific research and the industries and urging the industrial sector to involve and boost the R&D projects with market potential.  The CTI’s business lines are all equipped with corresponding policy instruments to achieve the industrial-academic cooperation target and mitigate the gap between the industry and academic sectors in the innovation chain.  The various CTI policy instruments may be applied in the following manner as identified in the following figure.

The Swiss Federal Government has invested considerable expenditures in technology R&D.  According to statistic data provided by Swiss Federal Statistical Office (FSO) and OECD, the Swiss research expenditures accounted for 2.37% of the Federal Government’s total expenditures, following the U.S.A. and South Korea (see Fig. 6).  Meanwhile, the research expenditures of the Swiss Government grew from CHF2.777 billion in 2000 to CHF4.639 billion in 2010, an average yearly growth rate of 5.9% (see Fig. 7).  It is clear that Switzerland highly values its technology R&D. 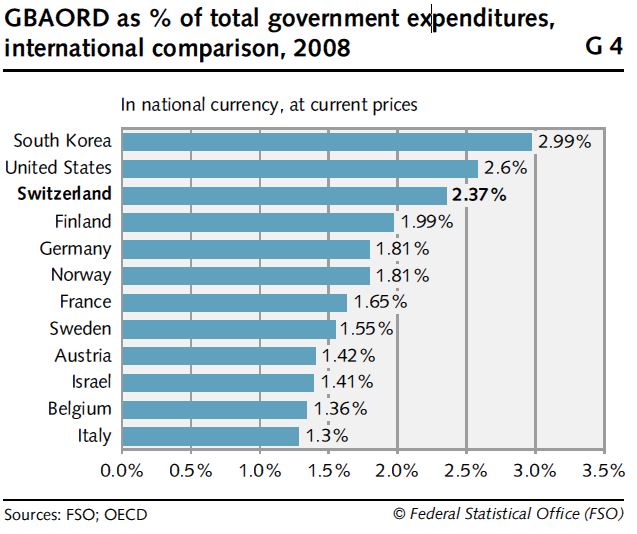 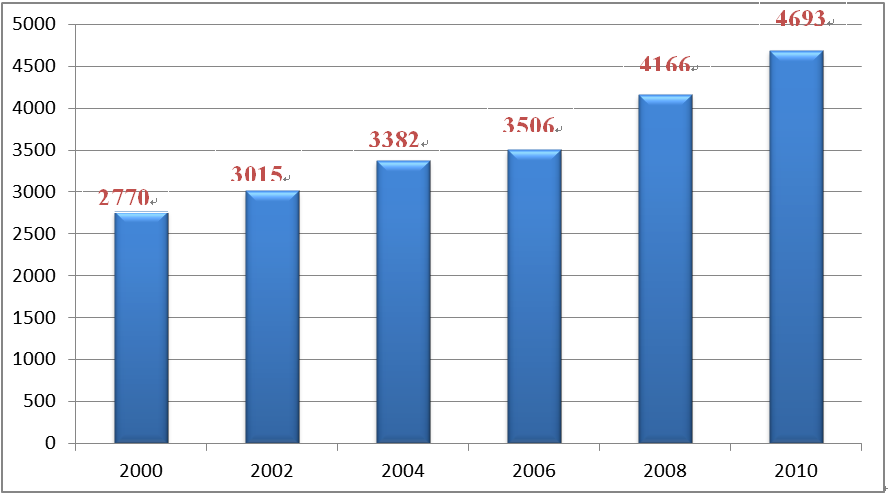 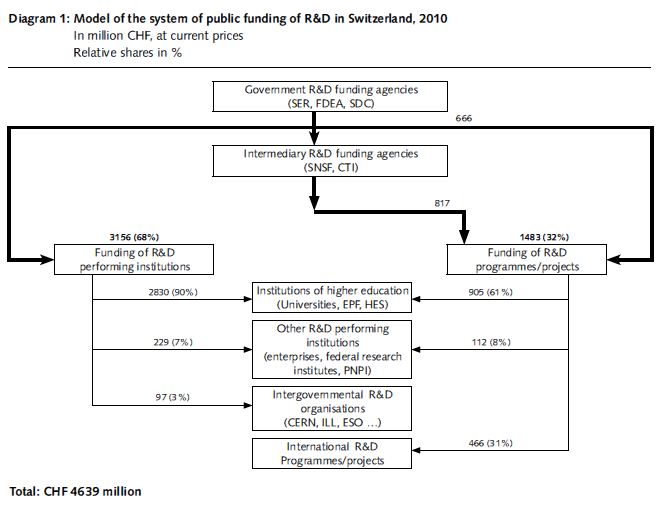 [3] The Commission for Technology and Innovation CTI, THE COMMISSION FOR TECHOLOGY AND INNOVATION CTI, http://www.kti.admin.ch/org/00079/index.html?lang=en (last visited Jun. 3, 2013).